Empowering Christian leaders and authors to tell their inspiring story

Do You Need To Start a New Chapter? 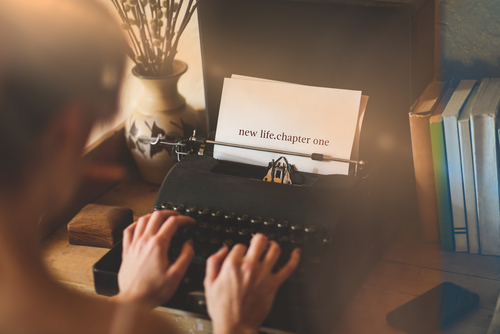 Do You Need To Start a New Chapter?

There’s nothing like embarking on a new chapter in your life. As writers, it can feel like we are doing that with each new devotional, article, or book segment we create. But it’s quite another thing altogether when you launch a new business and get married—all in the same summer. My former Cup of Coffee Coaching client and new colleague Rachel Richardson has done just that. I can’t say I had any role in helping her marriage come to pass, but I did train Rachel on how to start and market her new writing, editing, and coaching business.

We first met in February 2015 after I was introduced to her through her brother Micah who worked for one of my non-profit organization clients. He recommended her to be a writer for a magazine that my company was producing for that organization. We corresponded by email, and I asked Rachel to send me three samples of her writing (one poetry, one non-fiction, and one fiction) as well as her desires for her writing and editing with an eye toward where she’d like to be three years from now.

She responded with four samples and her resume, as well as this insight:

My ultimate goal is to feel as though whatever writing or editing I am doing is making a difference in people’s lives. What form this will take, I’m not sure. I simply know I’m meant to write and create. When I don’t, I feel shallow, unfulfilled. I want to make a tangible difference—whether by telling stories other people don’t have the writing skills to tell, creating fictional stories filled with truth, or as an editor helping to coherently shape another person’s ideas into a form accessible to others.

Wow! Her response showed me she had already been thinking through these important questions, and she was refreshingly vulnerable in describing how she felt when she didn’t write and create. I knew this meant that her passion—perhaps her very purpose in life—wasn’t being fulfilled unless she wrote or created. But she shared even more (she called it her “writer’s journey”) that I found to be compelling and personally relatable as a writer and editor.

Since I first became interested in writing, I had assumed that I would write fiction. I grew up an avid reader—mostly of pulp fiction. In high school, I dabbled with poetry, and found pleasure in writing it. So I went off to Seattle Pacific University (SPU) to earn a Bachelor of Arts in English, with an emphasis in creative writing, and a sub-emphasis in poetry.

In college, the flame of passion for writing was all but extinguished. This was probably due to perfectionism and an ill-designed plan for each quarter’s course load. I pushed through in three years, often taking more than one writing or literature course in a quarter in order to accomplish it. Between that and being in the honors college, writing on demand and for critique exhausted me. I’ve been trying to start afresh.

In my senior year I was suffering from writer’s block, or at least an unshakable belief that I wasn’t good enough. The SPU mentorship program set me up with a writer here in Tucson during the summer I was finishing up my courses. My fear of failure paralyzed me. My mentor didn’t wish to deal with either my writer’s block or my spiritual outlook on vocation. After two meetings, she ended the mentorship. Discouraged, I continued to let the days pass without writing. She concluded: Now…I want to throw myself into writing like I never have before. The problem is, I’m not sure where to start.

We met for about two hours in February, and by September she was financially able to start training with me on the fundamentals of starting a writing, editing, and coaching business—and learning how to identify her writing and editing passions and utilize them to find and serve clients who wished to be taught and nurtured in those disciplines. I wanted to succeed for Rachel where her previous mentor failed, and enable Rachel to become a mentor to others.

How did our nine months of training turn out? Take a look at her business, The Write Palette, for yourself—and then read Rachel’s thoughts next week as my guest blogger as she shares with you her excitement as she embarks on her new chapter as a person living her passion and purpose.

I want to hear from you!
What was your greatest discouragement as a writer or editor? How did you move past it?

INTEGRITY: I will be honest and not lie or mislead in anything I do.

WORK ETHIC: I will have a consistent commitment to honor best practices for writing, editing, publishing, and coaching; I will seek ongoing training for my skills.

COMMUNICATION: I will communicate with clients and my team clearly and thoroughly regarding expectations, processes and deadlines, scope of work, and terms and conditions of agreements.

INTERACTION: I will practice one-on-one interaction with a customized, personalized approach to help others tell their story.